Achieving Success
​​Bob obtained his first Architect’s license in 2000. His employers invited him to become a partner in Plan One in 2002. He opened the firm's Idaho office in Driggs later that year and became a senior partner soon after. His office employed eight full time staff and served a mostly public sector market over a five-state area.

​Most notably Bob developed major regional projects such as the INL's Energy Systems Laboratory and Energy Innovation Laboratory, both in Idaho Falls, and many other public projects totaling well over $100 million in value. Under Bob’s leadership the Driggs office received five Leadership in Energy and Environmental Design (LEED) awards and recognition from Engineering News Record for the Best Project in the Intermountain Area and the Best Green Project in the United States.​ 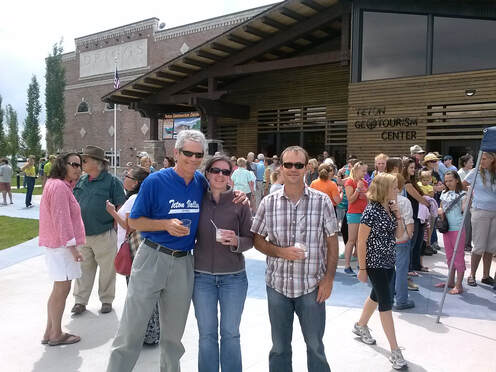 Serving Community
​Outside of Bob's career he has a long history of community service. He is proud to have served roles with:
Bob retired from architectural practice in 2017. While retirement in Teton Valley has its rewards, he chose to deepen his commitment to the local community when he ran and was elected as a Teton County Commissioner in 2018.
​
Elected Leadership
​Since Bob was elected in 2018, a wide range of new challenges for the county have taken place. They include a significant increase in demand on public services with the substantial influx of vacationers and new residents. Teton County and the intermountain West are seeing a development boom, straining businesses to fill job openings frequently due to a lack of housing options.

To get on top of the growth, Bob made a priority from the start of his term to getting the Land Development Code updated and through several stages of the review/rewrite process. Following over three years of work and three public hearings, the new LDC was completed and adopted by the Board of County Commissioners in July 2022.

Bob did a careful review of the county’s facilities putting an emphasis on efficiency, initiating renovations for both Road & Bridge and Search & Rescue along with many other projects and matters facing the county. He is currently the county’s representative on the boards of the Teton Regional Economic Coalition, the Driggs Urban Renewal Agency and the Five County Treatment and Youth Rehabilitation Center.

Bob and the other elected leaders also had to plot a course through the global pandemic that began in 2020 with all the challenges it brought to the valley and its citizens. By all measures, the valley achieved a lower hospitalization and death rate from the Covid-19 virus than most counties across the state and region.

For many years Bob has lived with his wife Patricia, better known as SoLaMeé, a local businesswoman and author, in the valley’s north end. Both of their children attended school in District 401. The Heneages have a deep respect for the valley and its residents, having lived in the valley for 32 years and making friends from all sides of the political spectrum.

After some reflection and with a deep appreciation for the job, Bob has chosen to throw his hat back into the ring, running for re-election as your County Commissioner November 2022.